Berri Barmera Council has embarked on an exciting Master Planning exercise for Riverview Drive Berri between Vaughan Terrace and the Berri Caravan Park.

Council recognises that this area is changing with new developments soon to be established on the former Berri Bowling Club land and ongoing investments made by the Berri Hotel and Berri Caravan Park. This stretch of road is in a prime public space which our community and visitors enjoy for events, relaxing, exercising and outdoor dining. It is a special place which Council recognises can be so much better.

Picture One: An Artistic Render of the Civic Plaza concept for the Berri Riverfront

Riverview Drive in this precinct has been identified as having redundant road space, a legacy from when trucks and cars used it to access the old ferry crossing. Council wants to put the road on a diet, free up space for the community to enjoy by expanding the riverside park areas and also create more functional areas for civic and entertainment events.

As a major project the improvements will occur over several years and combine a number of desired smaller stages that will result in Berri being a destination of choice and a great place to live. Tourists and visitors attending major events at venues, such as the nearby Regional Sports and Recreational Hub at Glassey Park, will now have added value to their stay with first class accommodation facilities and a thriving riverfront precinct for their enjoyment.

Find out more about this Project

The lack of mooring facilities along the Berri riverfront has been identified as impacting on local river users, visitors and larger vessels, such as houseboats, which have difficulty in mooring and visiting the township by river. This has become more apparent since the Berri marina and boat ramp were upgraded which have assisted in attracting more river events to the town and increased usage at the facility.

Council has secured funding through the Boating Facilities Fund to install a sheet piled wharf running 260m, incorporating a footpath and providing increased and safer mooring facilities for river vessels, which will encourage river users to stop and visit the township adding to the tourism attraction as well as being a great facility for locals to utilise.

Ensuring that the there is direct, welcoming and user friendly access from the river to the towns retail and recreational services, will certainly assist in rejuvenating the Berri Riverfront precinct, and an increase to river traffic will assist the growth of the town as a whole. 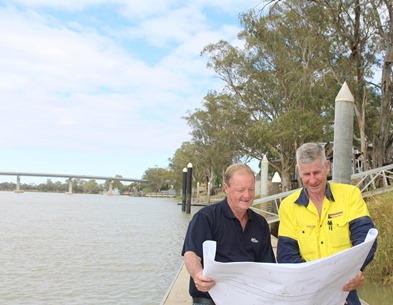