The Project commenced in the beginning of 2016 with development of Berri Riverfront Precinct Master Plan. The objective of the planning exercise is described below:

To develop spatial planning design, technical scope and specifications for capital works associated with potential upgrade of area between Ahern Street / Riverview Drive and Clarke Road Berri. Key drivers include Berri Resort future development, Council development for former Bowling Club site, and future potential development of Caravan Park and potential modifications to road networks to enhance amenity and multi use opportunities. Other key issues include connectivity and linkages to other precincts and areas within Berri Township and surrounds and also tracks and trails in vicinity of the Riverfront Precinct. Activities include consultation with key stakeholders and wider community, development of concept plans for workshop planning with Council Members, articulation into other strategic plans and Council’s Development Plan.

The foundation work required was completed in the 2015/16 financial year with a Traffic Management Concept Plan being developed which considers the key spatial determinant within this precinct-namely traffic movements and treatments. The initial traffic solution for vehicles, pedestrian and walking/cycling in the precinct provided the ‘base map’ around which all other spatial elements can be accommodated such as landscaping, street infrastructure, walking/cycling paths, art and functional design elements, disability access and commercial opportunities. From this exercise the Precinct vision continues to be developed which in turn drove more in depth planning, design and investigations of delivery opportunities including funding and staged development.

Focus shifted onto Stage One of the project in late 2016 with preparation of detailed design for redevelopment of the area between Ahern Street and Vaughan Tce west and narrowing of Riverview Drive to generate widened public areas and improved amenity. The successful Places for People Funding application was announced in June 2017 and confirmed delivery of Stage One works by August 2018.

An opportunity arose in late September 2017 to prepare a further funding application for Stage One extension between Ahern Street and approximately 80 metres east along Riverview Drive as depicted below. The application was submitted in October with the Berri Hotel Group committing $200,000 towards the estimated capital costs of $432,000. Should funding be successful Stage One extension works will be delivered in combination with the Stage One construction during 2018. If not successful in gaining funding the Stage One extension will be incorporated into Stage Two design, consultation and works program. Further activity on Stage Two planning was advanced during August to October 2017 and then placed on hold whilst awaiting further advance in the design of Berri Hotel car park and resort development on the former Bowling Club site.

Public Consultation for stage two closed on 29th June 2018.    Berri Barmera Council undertook stakeholder and community consultation on the Berri Riverfront Redevelopment Stage Two concept plan for redevelopment of Riverview Drive and adjacent reserves from the eastern side of the Hotel entrance to the old Boat ramp and adjacent to the caravan park.

Previously, a high level concept plan had been developed to illustrate the potential redevelopment of the combined stages in a precinct view. Since that time, the Berri Hotel Group have progressed their vision for the former bowling club site. Considerable effort has been made to integrate the design of paths and landscaping in Council’s project into the Hotel design to blend the public and private spaces and create the highest possible quality environment for tourists, locals and importantly people of all ages and mobility. 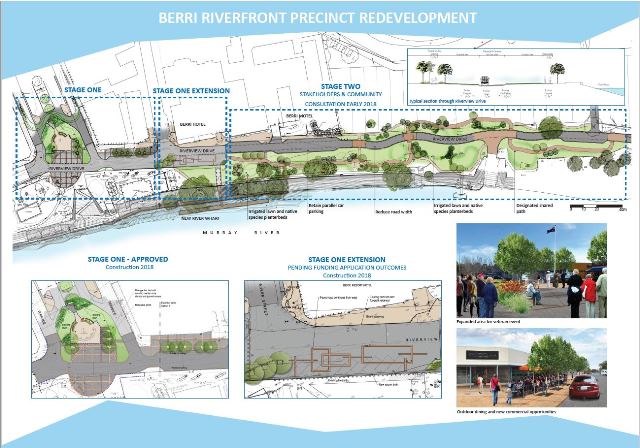 The precinct redevelopment aims to achieve the following key deliverables:

Existing view along Riverview towards Memorial

The overall project commenced in late 2015 in association with the demolition of the Berri Bowling Club and sale of land. This also coincided with conversations between the Hotel and Council on traffic planning for the precinct. It was decided that a Precinct Master Plan should be developed to capture all critical spatial planning and guide future development of public spaces.

During the first half of 2016 funding was sought to assist the progression of the Master Plan. Initial funding applications were unsuccessful. To enable the project to progress Council committed design funds in the 2016/17 Budget allowing a concerted effort to be made to prepare a fully designed and costed funding application for the November 2016 round of DPTI Open Space Funding. This included a decision by Council to stage the development, with Stage One being the Vietnam Veterans Memorial and VIC Civic Space between Ahern Street and Vaughan Tce.  With only a short period of time for preparation of the funding application, targeted and community consultation occurred during late 2016. Subsequently the funding application lodged early 2017 was successful and resulted in $500, 000 of funding support for the Stage One capital works which are valued at $1m.

Another round of funding was brought forward to October 2017 which represented a rare opportunity to apply for further funding. To assist in lodging a shovel ready project for funding , Stage One extension works were advanced to detailed design. In addition, to  ensure nil budget impact to Council, the Berri Hotel Group offered to commit $200,000 towards the capital costs with balance being  Open Space funding (if successful) and in kind Council support.

Stage Two Planning will be subject to Stakeholder and Community Consultation from April 2018. Importantly the adjacent proposed Hotel resort development on the former Berri Bowling Club land is advancing in design late 2017 and will be an important addition to the Precinct planning and consultation during 2018. Council has undertaken an integrated planning exercise with the Hotel’s design team to ensure both public and private realms have a high level of design connectivity and synergy. This will then enable the community to view the area from Ahern Street to the Caravan Park as a whole precinct and understand the proposed connection between public and private spaces.