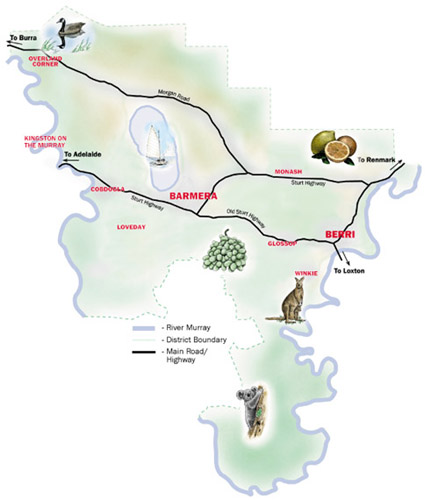 Each town is truly unique and there's plenty to discover about all of them, our irrigation settlements developed strong and resilient people on the land, who have plenty of yarns to spin.

Because of this varied history we are working towards developing webpages that will further share many of these stories. However for now, you'll just have to pay us a visit and let our local characters and ambassadors provide you a more personalised experience.

For a dose of nostalgia, have a quick look back in time and check out a YouTube video relating to the development of the Berri Bridge in the late 90's.

The town's name is derived from the aboriginal word "bery bery" meaning  'bend in the river' and was proclaimed in 1911. Berri features a gorgeous riverfront with plenty of areas for picnics or playing sport. It also includes floating wharf platforms, lookouts, historic monuments and an indigenous bridge mural. The Berri Visitor Information Centre also stocks a good range of local crafts and produce.  Berri has a varied range of eating outlets, including Chinese, Indian and Australiana themed restaurants.  There are several alfresco cafes and takeaway food outlets.  The Berri Hotel and Big River Tavern bistro offer pub classics along with some Asian and Italian choices. There are also a wide range of shops within the town centre and nearby Riverland Central Plaza if you get an urge for a bit of retail therapy! Attractions

Barmera is situated on the shore's of Lake Bonney, a large freshwater lake fed from the Murray River via Chambers Creek wetlands. During summer, there is action aplenty on the lake with boating enthusiasts enjoying our perfect summer days, either skiing, yachting or canoeing.  "Playspace" is an imaginative and active playground just opposite Lake Bonney where families can spend time enjoying the outdoors.  The main street of Barmera, one of the best examples of Art Deco design in Australia, has a panoramic view and boasts a range of specialty shops, the Barmera Hotel Motel and the historic Bonney Theatre. Barmera is renown for country music with a 'Hall of Fame' Museum and the annual Country Music Festival held every June. You'll always find something to see and do. Attractions

This town, only 5 minutes from Berri was named after Vice Admiral Glossop, commander of the HMAS Sydney during World War 1. Glossop, although a small town, is the home of Berri Estates, Australia's largest winery and distillery. Located just behind Berri Estates is Bella Lavender Estate, a beautiful lavender farm with Mediterranean style coffee shop, wood oven pizzas and a putt putt golf course. Attractions

Monash was originally known as 'Lone Gum' with reference to the solitary red river gum that still grows amongst the vines so far from the Murray River. This small town is probably best known for its fabulous adventure park. Adults and children alike flock to the Monash Adventure Park for a day of fun. The park is open daily and admission is free. Attractions

The Cobdogla Station once covered over 200 miles of river frontage and the former homestead was located on the site of the current caravan park. The station raised purebred horses which were used by the South Australian Police Force, the British Army in India and by the famous Australian explorer John McDouall Stuart. Today, Cobdogla is better known for its 'Irrigation and Steam Museum' which boasts the impressive Humphrey Pump. Attractions

Another small Riverland town, Loveday was proclaimed in 1940 and was the site of one of Australia's largest internment camps during World War 2. The camp was built to house German, Italian and Japanese internees and prisoners of war. At its peak, the camp held 5380 as well as over 1500 Australian Military Personnel. The camps supplied a variety of products including morphine, which was made for the forces from the harvested opium poppies grown in the campgrounds. Attractions

This settlement was named 'Winki Winki' after the aboriginal word for 'the flat' which covered the floodplain below the Winkie Slopes. Surrounded by Katarapko National Park with its sandhills, floodplains and backwater creeks, the area is ideal for fishing, yabbying, picnicking, birdwatching, bushwalking and camping. Attractions

This area is full of history covering indigenous and European occupation. The hotel was built in 1859 and is the oldest surviving building in the Riverland. It was frequented by drovers, explorers, travellers and even bushrangers. Now the hotel is licensed and provides meals from Tuesday through to Sunday. A historical walking trail starting at the hotel covers the history of indigenous groups, European settlement and the Murray River. The limestone cliffs at Herons Bend are riddled wth ancient marine life and the elusive Tasmanian Tiger is reputed to roam the area! Attractions